Here are two pieces of my work featured on MFPA Calendars, USA & UK for 2022.

Always nice to see. Many thanks to all involved!

Social Impact Heroes: Jim March of the Association of Mouth Foot Painting Artists of North America are helping disabled artists to become self-sufficient by teaching them to paint by mouth.

We have an artist out in California named Dennis Francesconi. Dennis is a Full Member of MFPA, meaning he receives an income from the Association (versus our student members who receive monthly scholarships for training, materials, assistance and well-being), which he will receive for the rest of his natural life — even if his health worsens and he is no longer physically able to paint. Dennis was, because of his membership, able to go into the Social Security office and say to them, “I no longer need government aid.” The sheer importance of this act cannot be understated; that he, a person living with a profound disability, was able to take care of not only his own financial well-being, but that of his family. There really are no words to fully articulate the tremendous sense of freedom he has been able to achieve. 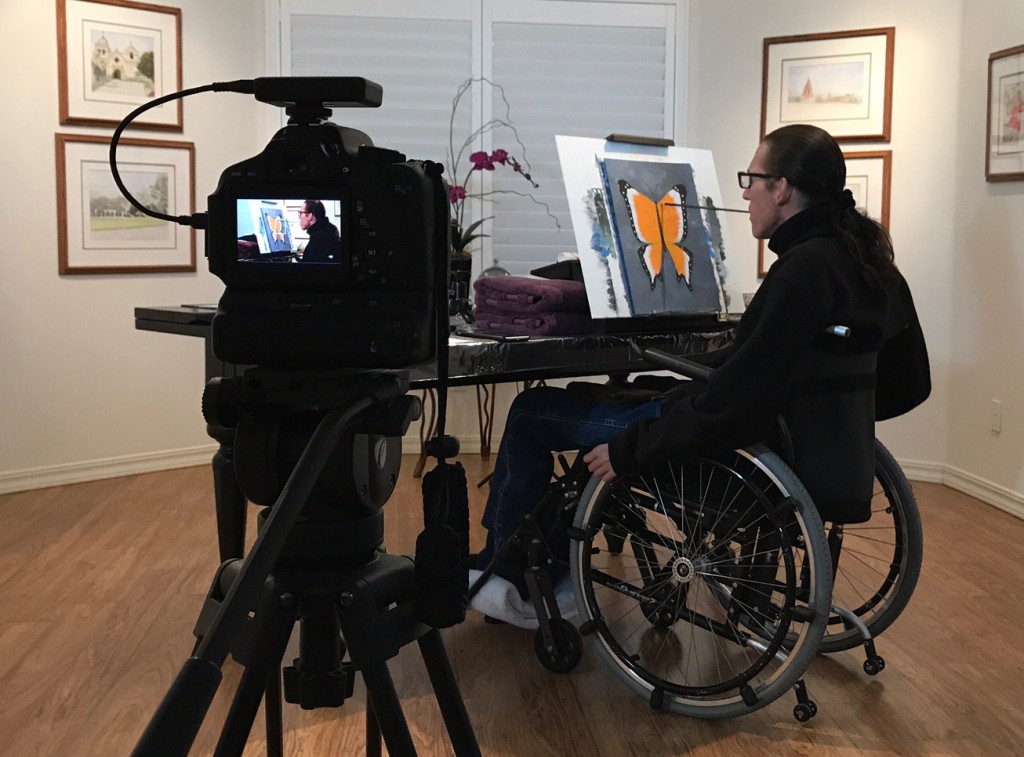 Bio: As the result of a water-skiing accident in 1980, — Dennis A. Francesconi [then 17] was permanently paralyzed. Since then, through hard work, determination, and the support of his wife Kristi, Dennis is once again on the fast track and making things happen. It all started in 1989 when Dennis taught himself how to write using his mouth. From sketching to water colors, what was first doodling for a few minutes became hours. In early 1993, he heard about the prestigious Association of Mouth and Foot Painting Artists, Worldwide [AMFPA] and quickly submitted samples of his work for review. By late 1993, Dennis was accepted as a Student Member. Just 5 1/2 short years later, he had climbed the ranks to the much sought after Full Member position— which gave him the opportunity to remove himself from 19 years of public support.

Dennis thrives on working as a Member Artist of the Mouth and Foot Painting Artists Inc. in Atlanta. Follow Dennis online at sconi.com and on Instagram at @sconiart. 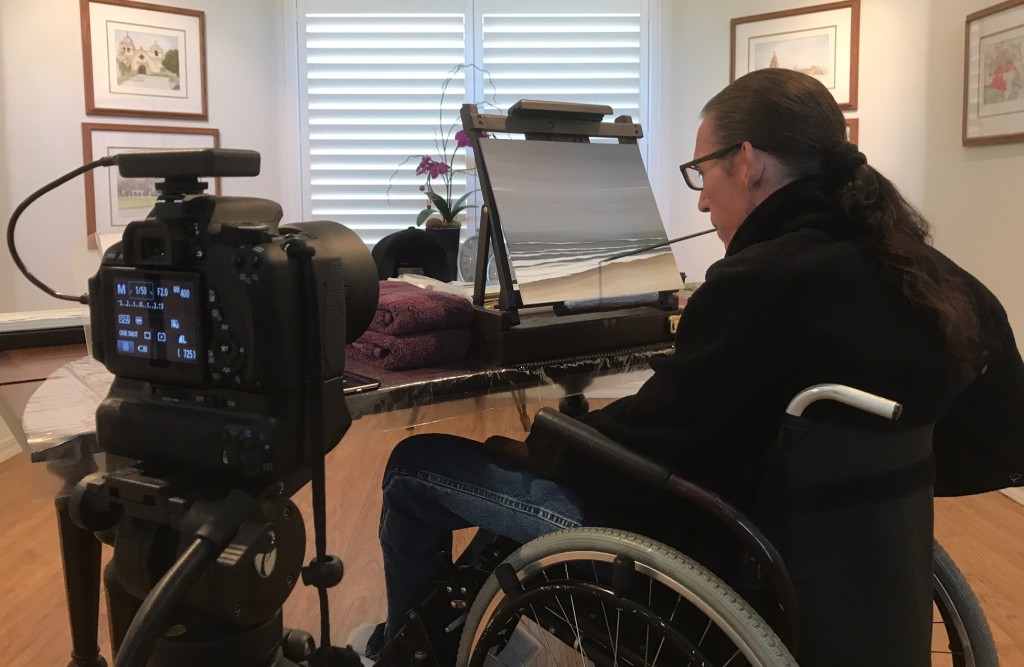 Dennis originally used a GoPro for awhile to create a timelapse, but had mixed results. “The battery would go out quick, and the GoPro on a tripod would have to be very close to me.” In looking for an alternative, Dennis searched for an option to remotely trigger his DSLR camera without using a cable, preferably using his smartphone. He says he came across the Case Air Wireless Tethering System and decided to purchase it based on positive reviews he read online.

“I’m on my fifth video using the Case Air and I absolutely love it,” says Dennis. “I control the camera from my phone next to my easel and I setup the video using the timelapse feature in the Case Remote app. Plus, the ability to adjust the aperture, ISO and white balance from the app then see how the change of settings affects the image really helped me learn how to use the manual feature on my camera.”

See Dennis in action in the video below, and learn more about the Case Air at www.tethertools.com/caseair. 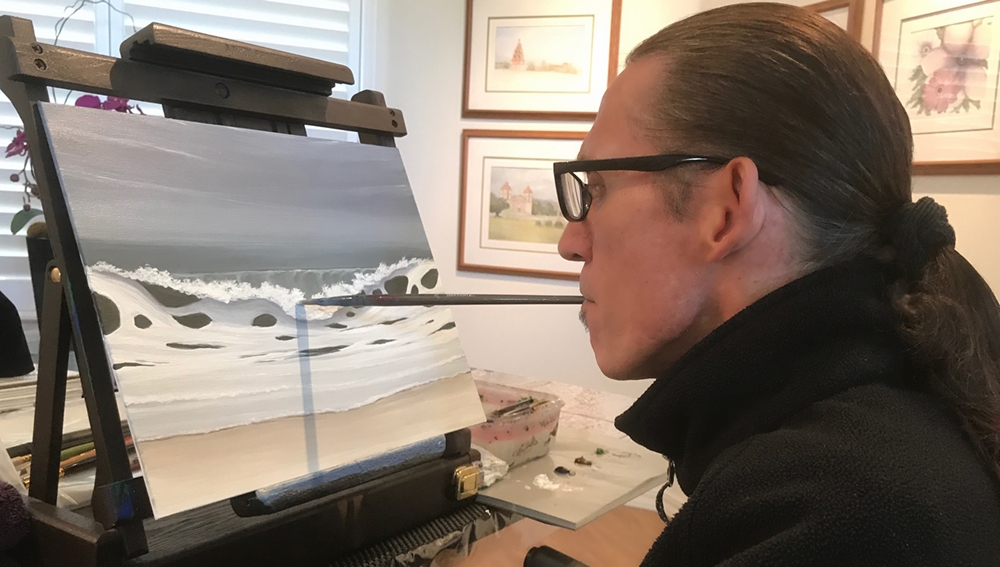 Update: From mid 2014 to late 2017 I was basically sidelined by an autoimmune system problem that made it impossible to continue with my work schedule. Everything from planning, painting, and participating in press opportunities was affected. I managed to struggle through a handful of paintings, and quickly realized that I wouldn’t be able to maintain any consistency.

Fortunately in late 2017 my autoimmune system calmed down on its own, and I was able to start painting some small pieces. During the last several months I’ve worked to regain my strength and endurance, and more work is currently underway. Having said that, it’s great to be back!

Thanks to everyone at the AMFPA, as well as MFPA Inc. for their support.

Lastly, many thanks to my amazing wife Kristi for all of her help, this has not been easy! 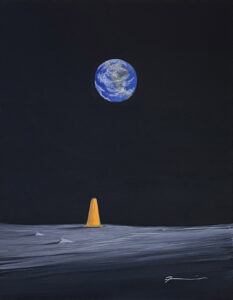 "Proceed with caution", acrylic by Dennis A. Francesconi